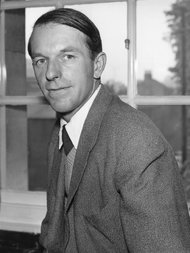 A 25-year (!) experiment with Escherichia coli bacteria by Richard Lenski and coworkers resulted in a 70% improvement in growth rate or "fitness" in 12 cell lines. 25 years of E. coli growth is equivalent to about a million years of human evolution. Six of the 12 lines developed defects in DNA repair, accumulating mutations at a higher rate than normal. Also, after 3 years of culture, two populations with conspicuous phenotypes evolved in one of the flasks: those making large colonies and those making small ones. Interestingly, neither came to dominate the other, implying two distinct ecological niches even in a high-nutrient culture broth. It's unclear whether such mutations would really be adaptive (contribute to fitness) in the nutrient-limited real world, but it's an example of dogged surrender to a scientific obsession that provides a baseline of data and possibly more. Or possibly not. C'est la science.
BTW, Edison's famous adage that genius is 10% inspiration and 90% perspiration applied to trial-and-error invention. Related to that, yet still different in not having a definitive goal in mind beyond answering a defined and limited question (that then leads to more questions to be answered), this can be amended for the experimental sciences. Genius is 10% inspiration, 20% imagination, 20% perspiration and 49% obsession (which may also include perspiration or not, depending on where one is in the collaborative hierarchy). The extra 1% is sheer brilliance, which is really not that important a factor in the experimental sciences. Or maybe it is. Who knows? C'est la science.

The Man Who Bottled Evolution

When most biologists want to understand how evolution unfolds, they look for clues in the fossil record or the natural world. Richard Lenski simply walks across his Michigan State University lab to his freezers. Stored there are bacteria from a 25-year experiment in bacterial evolution. He started with 12 identical populations of Escherichia coli and over time has documented how evolution is roughly reproducible but also endless, even in a stable environment. Fifteen years ago, he almost abandoned it for digital models of evolution, then reconsidered—and was vindicated when his bacteria took one of their most dramatic evolutionary leaps. Now he hopes to keep the experiment going for many, many years more.

This is a very unusual fish. 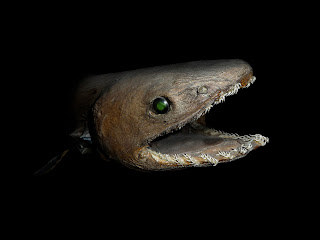 Posted by Unknown at 7:38 AM No comments:

"In this lesson, students will see first-hand how all different kinds of scientists work together in the process of discovering anti-cancer drugs. Students meet cancer doctors, biologists, chemists and learn how they take part in the various steps of drug discovery."
http://blossoms.mit.edu/videos/lessons/how_scientific_teams_develop_new_anti_cancer_drugs

Posted by Unknown at 7:29 PM No comments:

From the Agence France-Presse:


Nobel winner 'not on speaking terms' with co-laureate
(AFP) – 8 hours ago
Los Angeles — Nobel chemistry prize winner Arieh Warshel said Wednesday he was "not on speaking terms" with one of his two co-laureates, Martin Karplus, but thinks the award will bring them together.
Speaking to AFP after a press conference in Los Angeles, the 72-year-old Israeli American said he had spoken briefly to his "friend" Michael Levitt, a US-British citizen, but not so far with Karplus.
"With the other, I'm not really on speaking terms... So we will see," Warshel said, adding that he had worked with both Levitt and Karplus, who has dual Austrian and US citizenship.
He declined to elaborate, but added: "Now we'll talk and I'll maybe make him buy me a dinner."
Warshel told reporters he was woken at 2:00 am (0900 GMT) by the Nobel call, and had since taken calls from both Israeli President Shimon Peres and Prime Minister Benjamin Netanyahu.
Netanyahu asked for a brief summary of his work, but warned the Nobel laureate he may not understand it.
"So I gave him a one-minute lecture. He understood it, and he said that from now on, he will force his ministers to say whatever they want just in one minute," Warshel said as the room erupted with laughter.
One journalist asked Warshel what he was going to do with the "very large" prize money that accompanies the Nobel award.
"First of all, it's not large at all," Warshel said to laughter. "Second, I don't know if it's taxable," he added. When told it was taxable, he joked: "You could ask my wife."
The trio will share the prize sum of eight million Swedish kronor ($1.25 million), reduced because of the economic crisis last year from the 10 million kronor awarded since 2001.
Copyright © 2013 AFP. All rights reserved. More »
http://www.google.com/hostednews/afp/article/ALeqM5j4lVxOaFUAJleqnpCgHhFecqD1Hg?docId=640cc585-bde6-443a-bdb5-7f923f34889f
Posted by Unknown at 10:58 PM No comments:

No Physicist Is an Island

Here's an NY Times op-ed piece by the theoretical physicist Sean Carroll of Caltech on the tradition of giving Nobel Prizes to no more than three individuals in any one year, with specific reference to this year's awarding of the Nobel Prize in Physics to François Englert and Peter Higgs without also including other physicists who were instrumental in developing the Higgs mechanism.

LOS ANGELES — THE physicist Richard Feynman liked to gripe about what he called “Alfred Nobel’s Other Mistake.” The first mistake was the invention of dynamite. The second was creating theNobel Prizes. Mr. Feynman thought it was ridiculous that something as material as a cash prize should be awarded to something as grand and open-ended as scientific research. (The griping wasn’t a matter of sour grapes; Mr. Feynman shared a well-deserved prize for physics in 1965.) This year’s physics Nobel has just been awarded to François Englert and Peter Higgs, for what is simply called “the Higgs mechanism.” But while Mr. Englert and Mr. Higgs undoubtedly deserve acclaim, bestowing an award on them alone distorts the nature of modern physics research.
...
http://www.nytimes.com/2013/10/09/opinion/no-physicist-is-an-island.html
---
Re:
---
The Nobel Prize in Physics 2013
François Englert, Peter Higgs

The Nobel Prize in Physics 2013

The Nobel Prize in Physics 2013 was awarded jointly to François Englert and Peter W. Higgs "for the theoretical discovery of a mechanism that contributes to our understanding of the origin of mass of subatomic particles, and which recently was confirmed through the discovery of the predicted fundamental particle, by the ATLAS and CMS experiments at CERN's Large Hadron Collider"
To cite this page
MLA style: "The Nobel Prize in Physics 2013". Nobelprize.org. Nobel Media AB 2013. Web. 9 Oct 2013. <http://www.nobelprize.org/nobel_prizes/physics/laureates/2013/>

The Nobel Prize in Chemistry 2013

The Nobel Prize in Chemistry 2013

Posted by Unknown at 8:57 AM No comments:

The Nobel Prize in Physiology or Medicine 2013

The Nobel Prize in Physiology or Medicine 2013

Posted by Unknown at 4:23 PM No comments: 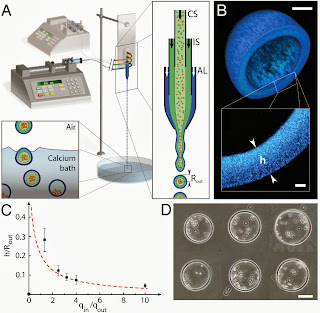 Here's a nice new microfluidic technique for studying cell mechanics by looking at the deformation of permeable elastic capsules as cells grow as spheroids within the confines of the capsules. This is thus a measure of the force exerted by the growing multicellular spheroids. The organization and behavior of the cells can be imaged and analyzed as well. The authors used their technique to look at tumor cell growth. They found that the compressive restoring force of the capsule results in formation of a solid-like core of denatured extracellular proteins and a peripheral rim of highly motile cells. The hyper-motile cells appear to have an invasive phenotype.

Tumor growth intrinsically generates pressure onto the surrounding tissues, which conversely compress the tumor. These mechanical forces have been suggested to contribute to tumor growth regulation. We developed a microfluidic technique to produce 3D cell-based assays and to interrogate the interplay between tumor growth and mechanics in vitro. Multicellular spheroids are grown in permeable elastic capsules. Capsule deformation provides a direct measure of the exerted pressure. By simultaneously imaging the spheroid by confocal microscopy, we show that confinement induces a drastic cellular reorganization, including increased motility of peripheral cells. We propose that compressive stress has a beneficial impact on slowing down tumor evolution but may have a detrimental effect by triggering cell invasion and metastasis.
Next Section

Deciphering the multifactorial determinants of tumor progression requires standardized high-throughput preparation of 3D in vitro cellular assays. We present a simple microfluidic method based on the encapsulation and growth of cells inside permeable, elastic, hollow microspheres. We show that this approach enables mass production of size-controlled multicellular spheroids. Due to their geometry and elasticity, these microcapsules can uniquely serve as quantitative mechanical sensors to measure the pressure exerted by the expanding spheroid. By monitoring the growth of individual encapsulated spheroids after confluence, we dissect the dynamics of pressure buildup toward a steady-state value, consistent with the concept of homeostatic pressure. In turn, these confining conditions are observed to increase the cellular density and affect the cellular organization of the spheroid. Postconfluent spheroids exhibit a necrotic core cemented by a blend of extracellular material and surrounded by a rim of proliferating hypermotile cells. By performing invasion assays in a collagen matrix, we report that peripheral cells readily escape preconfined spheroids and cell–cell cohesivity is maintained for freely growing spheroids, suggesting that mechanical cues from the surrounding microenvironment may trigger cell invasion from a growing tumor. Overall, our technology offers a unique avenue to produce in vitro cell-based assays useful for developing new anticancer therapies and to investigate the interplay between mechanics and growth in tumor evolution.
Posted by Unknown at 11:05 AM No comments: