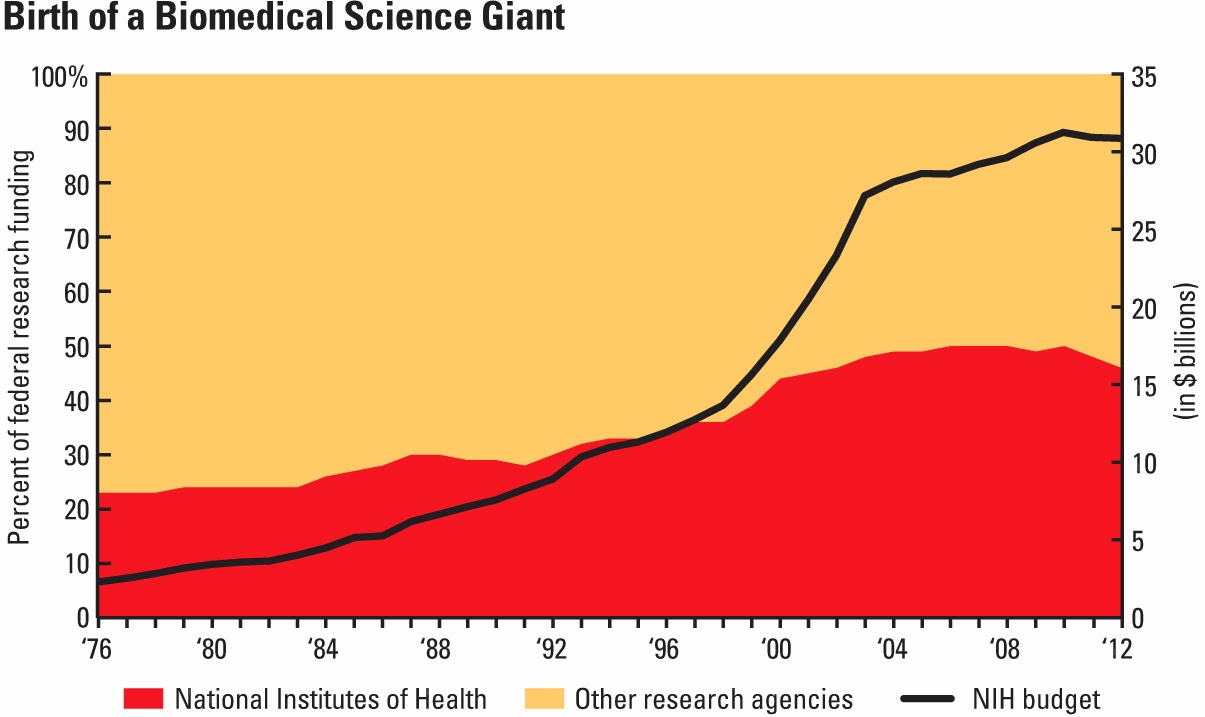 The 2014 budget suggests that the National Institutes of Health (NIH) is losing its place as first among equals when Congress has additional money to spend on research. Agencies that support the physical sciences grew much faster than did NIH, which receives nearly half of all federal research dollars, and some analysts think that pattern could repeat in 2015.
http://www.sciencemag.org/content/343/6169/357

Posted by Unknown at 9:48 PM No comments:

How do animals see color?

+Author Affiliations
How do animals see color? We may never know how another animal experiences red or blue, but we do know that sensitivity to ultraviolet light allows bees to see patterns on flowers where we see plain yellow or white. In fact, bee and human color vision are much alike. Both have three spectral types of photoreceptor whose signals are compared by neural “opponent” mechanisms, which are sensitive to the relative amounts of light at different wavelengths, allowing the animal to distinguish the spectrum of a light source from its brightness. Thomas Young (1) recognized in 1802 that having multiple receptors each with a different spectral sensitivity at each point in the image is essential for color vision, but inevitably impairs spatial resolution. He proposed three spectral receptors as the likely compromise. In fact, theory predicts that two to four receptor types are optimal for discriminating the spectra of natural materials and maximizing the number of objects that could be distinguished by color (2). The eyes of many animals seem to follow these principles, with a retina containing two to four spectral receptors combined with a neural mechanism to compare the responses of different receptor types (the color opponent process). It is therefore fascinating to find an animal that sees color in a fundamentally different way, as reported by Thoen et al. on page 411 of this issue (3).

A Different Form of Color Vision in Mantis Shrimp

+Author Affiliations
One of the most complex eyes in the animal kingdom can be found in species of stomatopod crustaceans (mantis shrimp), some of which have 12 different photoreceptor types, each sampling a narrow set of wavelengths ranging from deep ultraviolet to far red (300 to 720 nanometers) (1–3). Functionally, this chromatic complexity has presented a mystery (3–5). Why use 12 color channels when three or four are sufficient for fine color discrimination? Behavioral wavelength discrimination tests (Δλ functions) in stomatopods revealed a surprisingly poor performance, ruling out color vision that makes use of the conventional color-opponent coding system (6–8). Instead, our experiments suggest that stomatopods use a previously unknown color vision system based on temporal signaling combined with scanning eye movements, enabling a type of color recognition rather than discrimination.
http://www.sciencemag.org/content/343/6169/411
Posted by Unknown at 9:37 PM No comments: