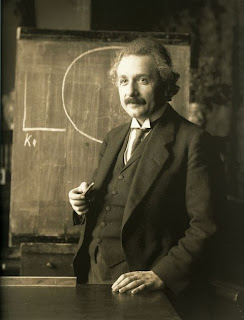 Einstein reading in a thickly accented English from his essay "The Common Language of Science" in 1941. There are also other recordings of Einstein speaking on the Web, but this one stands out as being clear and on an interesting subject.
http://www.openculture.com/2013/03/listen_as_albert_einstein_reads_the_common_language_of_science_1941.html 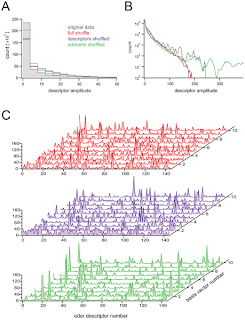 Believe it or not, it is not known how many basic classes of odors people can sense. Well, it may be ten! This comes from a mathematical analysis of odor profiles without regard to molecular physiology. If this were reflected in the biology of odor detection, the multiplicity of specific perceived odors would arise from differential and "combinatorial" activation of sets of distinct olfactory receptors. However, even the basic set of general categories could be broader, as the authors of the original article state:

"Our study has some limitations that should be noted. Chief among these is the small size of the odor profiling data set used relative to the much larger set of possible odors, which may limit the generality of our findings. In future studies, it will be necessary to extend the NMF framework to larger sets of odors than the 144 investigated presently, such that a more complete and representative sample from odor space is obtained."

So who knows? We return to: believe it or not, it is not known how many basic classes of odors people can sense.

Original Research Article in PLOS ONE

Sep. 18, 2013 — Taste can be classified into five flavors that we sense, but how many odors can we smell? There are likely about 10 basic categories of odor, according to research published September 18th in the open access journal PLOS ONE by Jason Castro from Bates College, Chakra Chennubhotla from the University of Pittsburgh, and Arvind Ramanathan from Oak Ridge National Laboratory. The researchers used advanced statistical techniques to develop an approach for systematically describing smells.

Published on Sep 13, 2013
The 2013 Ig Nobel Prize Ceremony took place on Thursday, September
12th at Sanders Theater, Harvard University, Cambridge, Massachusetts.
Ten (10) prizes were awarded. The winners have all done something
that first makes people LAUGH and then makes them THINK.

Posted by Unknown at 7:57 PM No comments:

The Glory and the Grind of Lab Life 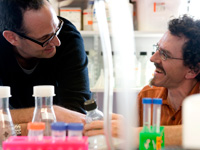 Here's a documentary on the life and times of three graduate students working to solve the X-ray crystal structure of the metabolic regulatory protein AMP-activated protein kinase in Larry Shapiro's lab at Columbia. It's worth a view if you haven't watched it.

Naturally Obsessed: The Making of a Scientist
Posted by Unknown at 6:46 PM No comments:

Cell migration is important in a range of processes like embryonic and tissue development, immune function, blood vessel formation and the spread of cancers to new spots in the body. Cells can move as individuals without cell-cell contacts or as groups that maintain cell-cell contacts. Here is a side-by-side examples of each. (I posted the movie on the left in a previous post.)

Bats and dolphins, though very different, both use echolocation to navigate their environment and search for food. They independently evolved this capacity. Amazingly, this convergence is seen in their genes, some of which became more similar over time and produced a similar set of traits to support echolocation. This convergence of genes involved in echolocation is seen both within groups of echolating bats (but not non-echolocating bats) and, more intriguingly, between echolocating bats and the bottlenose dolphin.

These findings are reported in a study in Nature  by Parker et al. These researchers performed a genome-wide sequence analysis for 22 mammals that independently evolved echolocation. As the authors state, "[t]his study represents the first systematic attempt to provide a framework for the genomic analysis of sequence convergence associated with independently shared phenotypes."

Very cool! Below is an excerpt from a Nature News write-up summarizing the original article. Expand
Bottlenose dolphins can detect prey with a sonar-like trick similar to that used by bats — and the similarity extends to the genetic underpinnings of this ability.
DOUG PERRINE/NATURE PICTURE LIBRARY
A new analysis suggests that many genes evolved in parallel in bats and dolphins as each developed the remarkable ability to echolocate.
Different organisms often independently evolve similar observable traits such as anatomical or functional features, but the genetic changes underpinning such 'convergent evolution' are usually different. The new study, published today in Nature1, hints that evolution may be finding the same genetic solutions to a problem more often than previously thought.