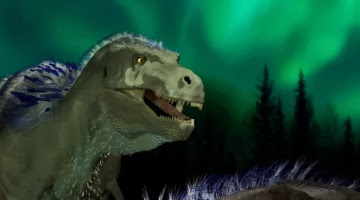 The newly discovered Nanuqsaurus may be the first uncontested example of a pint-sized tyrannosaur
KAREN CARR
High above the Arctic Circle, along an Alaskan river, palaeontologists have unearthed fossils of the first known tyrannosaur species at either pole.

The new animal comes from so far north that it is named Nanuqsaurushoglundi, after the Inupiat word for polar bear (nanuq). Its existence near the top of the world shows that relatives of Tyrannosaurus rex survived and even thrived in extreme polar environments, some 70 million years ago.
Perhaps more significantly, Nanuqsaurus may be the first uncontested example of a pint-sized tyrannosaur. In life, the Alaskan dinosaur measured some 7 metres long — small when compared to T. rex, which stretched 12 metres from nose to tail.
...
http://www.nature.com/news/diminutive-dinosaur-stalked-the-arctic-1.14859